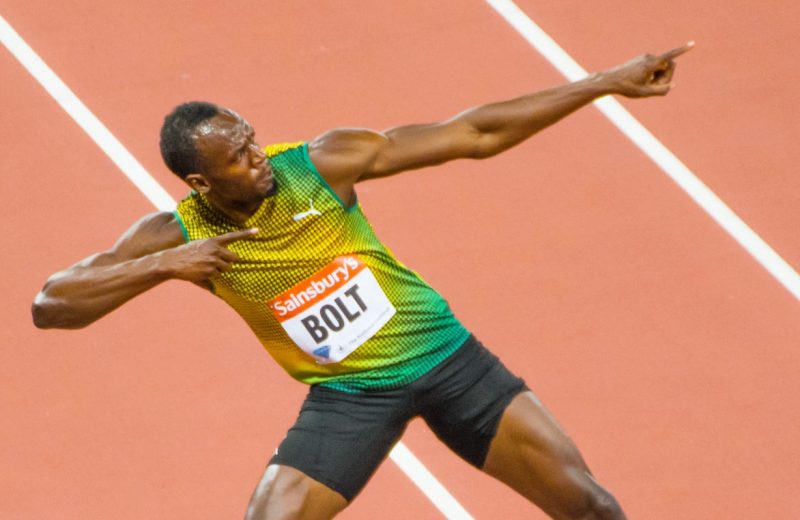 Usain Bolt is currently the reigning Olympic champion over 100m and holds both world and Olympic 100m records with a time of 9.58 seconds. He is also World Record holder for the 200m, running at 19.19 seconds in Berlin on 20th August 2009.

In 2009 Usain Bolt was named sportsman of the year. He is one of the most charismatic athletes that have hit the world stage in a long time.

Bolt uses a combination of plyometric training and weight training to build functional strength. The core exercises for improving performance over 100m and 200m are:

Lunges and squats are the core weight training exercises to build strength. Ideally performed with free weights, and go heavy. Sets of 8-12 reps are ideal. The bunny hops and frog leaps build explosive strength. See our plyometric workout for boxers to get more information on plyometric training. Circuit training is also an essential part to all round athletic fitness.

In addition to building core functional strength, Usain Bolt’s workout plan includes a lot of flexibility training and sprint drills. Bolt trains for about 3 hours a day, but this is intensive training, followed by rest, massage and relaxation to ensure full recovery before the next session.

Usain Bolt is one of the few professional athletes who does not take supplements. He admits to taking vitamin C, but nothing else. Instead, Bolt opts for a high-energy diet to maintain his engine, ensuring that each of his six daily meals contain 60% protein, 30% carbs and 10% fats. Sprinters should consume one gram of protein per pound of bodyweight to build and maintain muscle. So at approx. 14-stone, Bolt needs to consume 196 grams of muscle-building protein every day. He alleges to achieve this by eating a lot of chicken fillets, pork and fish. On the day that he beat the world 100m record, he described his preparation as:

“I woke around 11am and decided to watch some TV and had some nuggets.” – Usain Bolt

Bolt also loves his yams, which are an excellent source of energy-transporting carbohydrates, digestion-aiding fiber and vitamins C and A. Yams are a tropical root vegetable, but can often be purchased from shops in Caribbean communities. Usain Bolt is currently sponsored by Puma. An Usain Bolt diet will not suit all athletes, and many believe that supplements play a vital role in obtaining peak performance.

(the previous video is no longer available, so here is a new one from YouTube showing him doing some basic sprint training.

The information is provided by Usain’s coach, Glen Mills. Glen talks about Usain’s strength training and specifically how they try to increase his strength each season. He may time also give more insights into Usain Bolt’s diet and workouts. You can learn more here: http://www.usainbolt.com/page/training.

New Studies in Athletics (NSA) interviewed Glen Mills and from this we can learn a lot about the training methods used to get Usain Bolt into world-class shape.

If you want to keep track of what Usain Bolt is up to then follow his Twitter page: http://twitter.com/#!/usainbolt