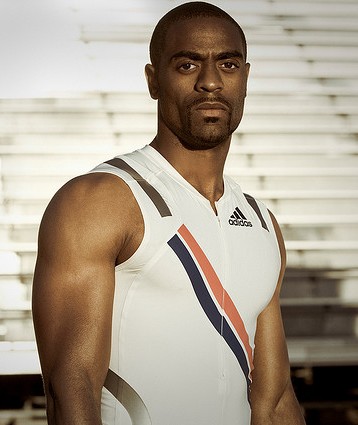 Tyson follows a standard sprinter training schedule. Off season he concentrates on weight training to build muscle and functional strength. Free weights and plyometrics play a large role in this. Weight training will be split into two sessions, upper and lower body.

Athletic strength requires intensive weight training, with emphasis on lifting heavy weights with 8-12 reps for 2 or 3 sets per exercise.

Upper body workouts for sprinters are very important, as the upper body helps to power the body forwards. Sprinting is certainly not all about strong and quick legs!

During the running season weight training is reduced to maintenance workouts, which ensure muscle mass is not lost. Also repetitions are increased up to 15 per set to start build on greater muscular endurance. Plyometric and jump exercises are increased, plus of course serious track work, building on sprint speed, flexibility and endurance training and circuit training.

Sprinters need to eat a lot of protein to build their functional, athletic muscles. Typically breakfast will consist of eggs and sometimes bacon. Lunches and dinners will provide lean meats, chicken and fish with healthy salads, pulses and whole grains.

Of course, protein supplements and other recovery drinks will be drunk to ensure that minerals, proteins and carbohydrates are all kept at optimum levels.

He eats chicken everyday at 6pm. But he gives himself weekends off and goes crazy with McDonalds and ice cream.

Tyson certainly likes to eat. Apparently one of his favorite meals is a dish called Grilled Mahi Mahi St. Charles, which consists of fish, lobster, shrimp, sauted mushrooms and spinach in a Dijon cream sauce, served with dirty rice (a traditional Cajun dish made from white rice cooked with small pieces of chicken liver or giblets). Possibly a perfect feast of protein and carbs for his training needs.

America’s Tyson Gay may be spending much of his time on the track looking at the back of Usain Bolt at the moment, but he is still one of the greatest sprinters in the World, and also America’s finest.

He is still the fastest man in America over 100m, with a time of 9.77 seconds. In 2007 he was awarded the IAAF Male Athlete of the Year, the USOC Sportsman of the Year, the Jesse Owens Award winner and Track & Field News Man of the Year. Until Usain Bolt found his form, Tyson Gay was the man!

Tyson is currently coached by Lance Brauman and Jon Drummond. Lance Brauman is a controversial coach to say the least, as he spent a year in jail for fraud. However, even when behind bars, he guided Tyson Gay by giving him a year training plan to follow and also spoke regularly with him on the phone.

Tyson had a poor start to 2009 with a serious knee injury that lost him 6 vital weeks of training. This could have affected his chances in Berlin, as he was no match for Bolt. Tyson Gay is not just a sprinter, but also a footballer at heart. He has said that if he was not a successful runner he would take up football, and had a good time playing in college.