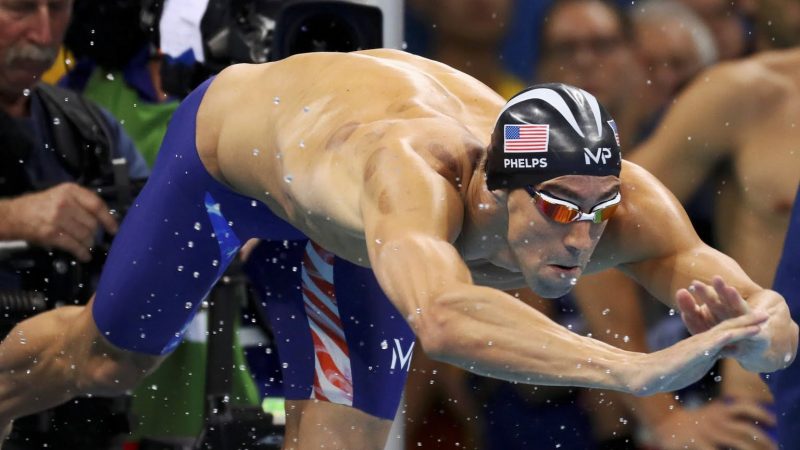 Michael Phelps, the American swimmer, was hailed as the greatest Olympic athlete of all time after winning his eleventh gold medal in 2008, and now has a staggering 19 Gold medals (August 9, 2016). There is no doubt that Michael Phelps is extremely well suited to swimming.

Phelps is 6 foot 4 in tall and weighs around 185 pounds (84 kg). He has size 14 feet and a 6ft 7in arm reach, which is 3in longer than his height. He has relatively short legs for his height, which gives him an additional advantage in the pool. Also his knees are double-jointed and his feet can rotate 15 degrees more than average, allowing them to be straightened fully so that his mighty feet act like flippers. These genetic advantages help him to kick off the wall and propel himself dolphin like 10m before actually have to swim. This is how he got the name, “the human dolphin“.

A little known fact about Phelps is that in his youth, he was diagnosed with Attention-Deficit Hyperactivity Disorder (ADHD). He started swimming when he was seven years old, partly because of the influence of his sisters and partly to provide him with an outlet for his restless energy.

Michael Phelps will be competing in only 7 events in the London 2012 Games, so he will not be able to match his Beijing record of winning 8 Olympic Gold medals in one Games. He has dropped the 200-meter freestyle.

Michael Phelps’ heart pumps 30 litres of blood each minute to his muscles, which is double the amount of the average adult male. He also produces only one third of the lactic acid that the average swimmer does, meaning that he does not suffer from muscle burn during intensive exercise like his competitors do. He says that after a race his lactic acid levels are the same as a person who is at rest.

His breakfast typically consists of three fried egg sandwiches topped with cheese, lettuce, tomatoes, fried onions and mayonnaise, toast, an omelette, porridge, three pancakes and two cups of coffee. This breakfast could easily feed the average family. This is not all eaten at once though, before practice, he eats cereal or oatmeal, and then after practice, it’s the eggs, omelettes and veges. Sounds like he is on an egg diet.

Phelps lunch usually consists of a pound (500g) of pasta, with two ham and cheese sandwiches and approx. 1000 kcal of energy drinks.

For dinner Michael Phelps has more pasta, another pound of it, with a pizza and more energy drinks. In addition to this he will take protein supplements to keep his muscles in top condition.

According to some web sources (unverified), Phelps takes a supplement stack that consists of Megadrox and Testadrox, along with protein supplements that claim to boost muscle power and testosterone naturally. These are both legal performance enhancers. However, there is nothing official from the Phelps camp on this.

A swimmers diet needs to combine protein and carbohydrate to ensure there is good muscular growth and endurance.

He will also snack on fruits and nuts so ensure that he is getting good nutrition as well as calories.

Michael Phelps’ daily routine is very much like other swimmers’ routine – many hours spent in the pool, with added dry training, which largely involved weight training, isometrics and HIIT.

Phelps trains for six hours a day, six days a week, without fail. Even if Christmas day falls on a training day, he does a full day of training. Total dedication to his training program has made him a world champion.

He swims approximately 50 miles (80km) each week, which is over 8 miles per training day. He has two massages everyday and also takes ice baths to help his body to recover.

Some people have been critical of the claims that Phelps is the greatest Olympian of all time, as swimming provides an opportunity to win a lot of medals. Decathlon athletes have to excel in 10 events to have a chance of winning just one medal, and boxers, judoka, archers and road racers all only get the one chance. Some argue that Daley Thompson is still one of the greatest Olympians for his success in the decathlon in the 1980’s, or Michael Johnson for his total dominance on the track during the 1990’s.

If you wish to take up swimming as a sport, then contact your local swimming club. Swimming clubs are a great way to improve your swimming abilities and many actively encourage club members to compete in local competitions.

OK, so how does Michael Phelps train? Let’s take a look:

A swimming exercise program needs strength training as well as pool workouts. Swimmers can improve their performance by building their upper body. Broad, powerful shoulders are essential to a swimmers physique, as the help to propel the swimmer through the water.

Michael Phelps is an excellent example of this, as his upper body is actually more developed than his lower body. To help build muscle to improve speed and stamina in the water, you should focus on the following three weight training for swimmers exercises. This is not a daily routine, weight training of this nature requires rest days to allow the muscles to recover. Follow this swimming training plan for better results:

Aim to perform 3 sets of 10-16 repetitions of this exercise. Swimmers need to develop muscular endurance, not hypertrophy. To perform the standing dumbbell press, start with the feet shoulder width apart and your knees locked out. Keep you chin level with the floor and raise the dumbbells so that your elbows are just below shoulder height. Tighten your abdominals and slowly press the dumbbells up until your arms are above your head.

At the top of the movement, briefly pause before lowering the weights back to the start position. Keep your arms vertical throughout the exercise, ensuring that your wrists and elbows form a straight line. Keep the abdominals and lower back tight to help support the spine during the exercise.

If you do not have dumbbells, then resistance machines in the gym will suffice. Be sure to position yourself and the machine so that your hands start above your shoulders, not in front of or behind.

Pause momentarily before returning the weight to the start position. Ensure that you have a solid stance and that your heels do not lift up off the floor. The emphasis is on the front deltoids.

This exercise is a little more awkward than the first two. Firstly it should be performed on an inclined bench (approx. 45 degree incline). Start by holding the dumbbell in one hand while laying on the bench on the opposite side of your body – i.e. if you hold the dumbbell in your right hand to start with you need to be laying on your left.

The free arms should be rested over the top of the bench to help with support. To start, the dumbbell is held across your body, with the palm facing downwards. Slowly raise the weight upwards until it is perpendicular to your torso. Lower slowly back to the starting position, then repeat with the other arm.

A flexible shoulder girdle is essential to all swimming strokes. Improved performance can be gained by working on flexibility in the upper body. Weight training exercises increase the contraction of the muscles, which improves the range of motion for a joint.

When performing weight training exercises as above, ensure that your work through your full range of motion. Do not do any partial reps, i.e.do not resort to lifting through just half the range of motion when you get tired.

There are any other exercises that can compliment a swimming routine. The general rule for swimmers, as it is for all athletes, is to perform compound weight training exercises, and aim to increase repetitions to build muscular endurance.

Read more on swimming and swimming for fitness.

Michael Phelps has embraced the Internet and shares news and sometimes training online. On his Faceboo page he shares not only what he is doing with regards to training but also any charity work or other business he is involved in: www.facebook.com/michaelphelps. He is also a regular Tweeter, keeping his 95 thousand followers updated: http://twitter.com/#!/michaelphelps.

The Michael Phelps Swim School provides specific swimming training for children. It started as the North Baltimore Swim School (NBSS) and Phelps was one of its first students. After his success he came back to help support the school.