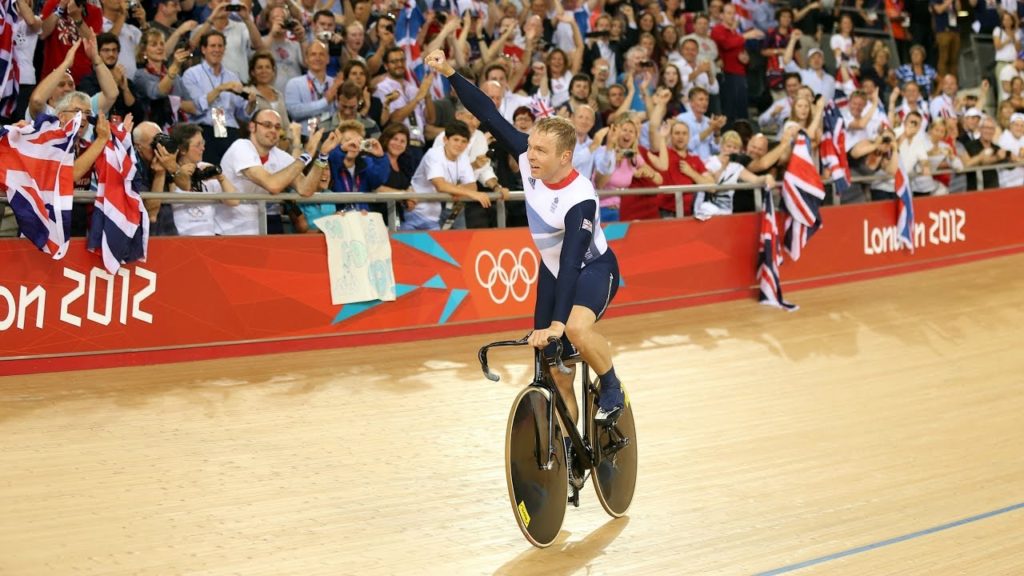 Chris Hoy collected 6 Olympic gold medals for Great Britain, 3 in Beijing 2008 and 3 in London 2012, proving himself to be one of the worlds finest ever track racers. Hoy became the first British Olympian for 100 years to claim three golds at one Olympics in the 2008 Games in Beijing when he won the keirin, the team sprint and also the individual sprint. On 7th August 2012 he won his 6th gold medal, winning the keirin final. He won his first Olympic gold medal in the 1 km track time trial in the Athens 2004 Games.

Chris Hoy’s training regime is very varied, as well as incredibly intense. We shall look at just one part of his sprint training here, the V02 Max Intervals.

VO2 max, also known as maximal oxygen/uptake or simply aerobic capacity, is the maximum capacity of an individual’s body to transport and utilize oxygen during incremental exercise. This reflects the physical fitness of the individual. The name is derived from V̇ – volume per time, O2 – oxygen, max – maximum. So, what does this mean? Basically, when sprinting oxygen is quickly depleted in the muscles, and aerobic exercises turns to anaerobic. As soon as this happens, lactic acid builds up, and muscle fatigue starts. VO2 Max training aims to increase oxygen capacity, in order to increase aerobic efficiency.

This workout can be done either on the road, on a turbo trainer or on an exercise bike. Training on an exercise bike is often recommended as you can control the workout and focus on cycling without having to concentrate on traffic.

For this workout, train on either a slight incline, or equivalent resistance on a machine. Warm up for at least 20 minutes, starting easy and building up effort slowly to the point that it becomes difficult to speak. Once warmed up, perform three full intensity sprints of 20-30 seconds, with a 2 minute recovery between each one. This completes the first stage of the workout.

After the sprint cycle gently for five full minutes. Lengthy recovery is essential to give time for your muscles to recover their oxygen levels. Once the recovery cycle is complete, perform another three minute sprint. Focus on completing an interval properly, i.e. without failing. This means that you have to carefully choose the gear/resistance and speed at which you cycle. It is better to perform only one good sprint interval than a few poor ones.

This training type requires that you build up your stamina over time. It is generally recommended to perform this type of interval training just once or twice a week over a period of three weeks, with easy, steady cycling for two days between each VO2 session. Try to increase the number of intervals completed in each session to a maximum of five. Once you can do five, aim to increase work rate, i.e. sprint faster with higher resistance, rather than increase the number of intervals.

If you are competing in any form of event, stop this training at least two weeks before, to give your body chance to fully recover. Over training is easy to do when performing such intensive exercise. Ensure that you eat well and consume plenty of fluids, especially post workout energy / protein drinks.

Christopher Hoy MBE was born on 23 March 1976 in Edinburgh. He is a track cyclist representing Great Britain. He is a multiple world champion, and Olympic Games gold and silver medal winner. With his three gold medals in Beijing 2008 Hoy became Scotland’s most successful Olympian, and the first Briton to win three medals in a single Olympic games since Henry Taylor, in 1908. He is also the most successful Olympic male cyclist of all time.

Chris Hoy in the News

Jon Wade studied Health Sciences at the Open University, specializing in Nutrition and Obesity. He has trained in many martial arts, including kickboxing, kung-fu and karate, has played cricket and plays badminton. He started weight training to support his martial arts during the 1990s and still lifts today. He has been researching and writing on fitness, weight training and health since 2006.