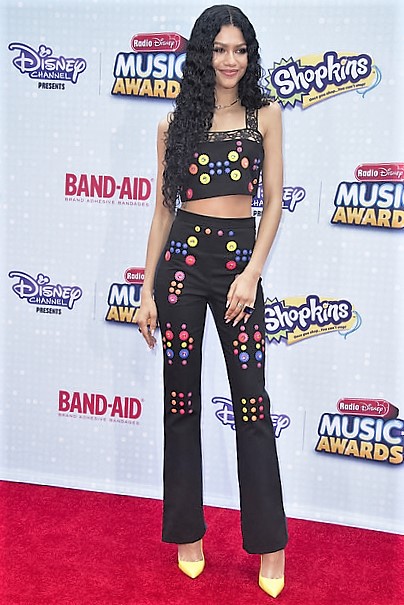 Zendaya rose to fame on the Disney Channel sitcom Shake It Up, playing Rocky Blue, and has since gone on to become an accomplished singer, dancer and actress. She is in great shape and is a good role model for teenage girls and young women.

Zendaya was in the Future Shock Oakland dance group for three years when she was a child – they did hip hop and hula dances. This early introduction to dance inspired her to carry on and we can attribute much of her fitness today from dance workouts.

She admitted in an interview with eonline that she doesn’t like going to the gym, saying: “I don’t go to the gym! If we’re going to be honest here, I hate the gym. I do not do gyms, it’s just so boring. The way I get my exercise is I have to do fight choreo for my show or I dance. I have to do something that’s fun for me.”

So, she is either working out in prep for filming, or she dances! Of course, you should not beleive everything she says in just one interview. Another source reveals that she works out at home for around 30 minutes every day, and it is not just dance, but also high-intensity aerobics and plyometrics.

Like many young celebrities today, she focuses on eating a healthy, balanced diet, which gives her all the nutrition she needs without overloading the body with unnecessary sugar. She enjoys eggs for breakfast, usually cooked as omelets, and served with wholegrain bread and fresh orange juice. Did you know that eggs are one of the healthiest foods you can eat for breakfast?

She is also a vegetarian, which is another reason why she loves eggs! She loves eating burritos, and also enjoys rice salads with a few vegetables. She actually admitted that she is not a big fan of veges – a little crazy for a vegetarian!

She enjoys eating ramen noodles in a broth. Sometimes she also eats sugary breakfast cereals, which totally goes against what we just told you about her love of eggs!