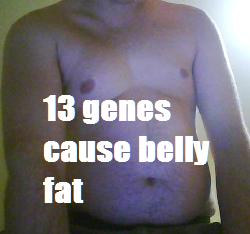 Scientists from the Institute of Metabolic Science in Cambridge, UK, have uncovered a wide range of genes that are connected with obesity. However, they have also emphasized that none of the genes force people to become obese, they just mean that a person may have a greater tendency to eat too much.

Obesity is still a growing problem, even with so many initiatives set up to try to control the problem. Many people blame their genetics on their weight problems, usually with the simple argument that their parents were overweight, so therefore it must be genetic.

It now seems that there may be some truth in this idea. Researchers have identified 18 different genes that are linked directly to obesity, and 14 other genes that contribute to obesity. Also, 13 genes have been identified that determine if fat is accumulated on the waist or thighs. So stomach fat is actually genetic, to a certain extent.

However, although these genes are related to obesity, every single case of obesity is preventable and reversible though healthy diet and exercise. The biggest problem is not so much that people do not know how to lose stomach fat, but that many people live in denial of their condition.

Genetics Does Not Cause Obesity

The research also pointed out that many people carry these genes and manage to remain at a healthy weight.

This suggests that these genes may act through increased food intake — maybe appetite and reward. But you still need the environment on top of that to really trigger that susceptibility.

Our genetics have not changed over the last 30 years, but obesity levels have risen dramatically. This is the real proof that obesity is not directly related to genes, but is a socio-environmental condition.

A combination of blaming genetics and not understanding what contributes to a healthy diet are the real causes of obesity. Many obese people are convinced that their diet is not the problem, even though in reality that are eating more than twice as much food every day than they actually need.

The research did identify some genes that determine where on the body fat is stored. This helps to prove that spot reduction of fat through exercise is not possible.

This research will help scientists understand the role of genetics in influencing appetite and activity, however, it will not actually change the way people think about food and exercise. For there to be real change there needs to be more education on food, healthy eating, exercise and lifestyle.

Also, these genes that are being “discovered” have been in the human population for a long time. However, it is only in the last 50 years that obesity has become a problem. Carrying a particular gene only makes people more susceptible to overeat if they are living in an obesogenic environment.