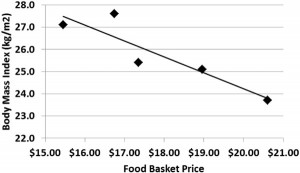 New research has shown a link between the average price of supermarket food and obesity. Danijela Gasevic, from Simon Fraser University, along with Scott Lear and Nadine Schuurman, carried out a study to explore the relationship between the built food environment and body mass index (BMI). They examined 555 people shopping at 5 different supermarkets and found that on average those who shopped at the cheaper supermarkets tended to having a higher BMI.

While all supermarkets in the study sold a similar range of fruits, vegetables and cereals, there appeared to be a relationship between the cost of these food items and BMI figures. The research did not show any relationship between the distance of the supermarket to home and obesity, which is a little surprising as this is a trend that has been seen in previous studies.

The researchers found that average BMI was 3.66 kg/m2 higher for those who paid less for their food.

Previous studies (see McLannahan and Clifton) have shown that on average wealthier women in developed countries are more likely to keep fit and stay in shape than poorer women. The opposite trend is seen in men though – wealthier men are more likely to become obese whereas poorer men, often the traditional working class, tend to be slimmer.

But do cheap supermarkets cause weight gain?

Of course, there are many other factors involved. Cheaper supermarkets are often in more deprived areas where there are other social-economic issues which affect rates of obesity – this is all part of the obesogenic environment. It is worth noting that wealthier women do tend to be slimmer due to social and environment factors and also shop in the more prestigious supermarkets.

While there may indeed be a relationship between the price of goods in a supermarket and the BMI of people shopping, this does not mean that cheap supermarkets are causing weight gain – it may just be that cheap supermarkets are attracting people who are already overweight due to their social-economic situation. Any policy change to increase food prices is likely to backfire and simply squeeze the poorest people further, forcing them to make even worse dietary choices.

Regardless of cause or effect, there is certainly a problem here that has been highlighted before – poorer people, especially women, tend to gain weight and stay overweight while their wealthier neighbors stay in good shape. Why do you shop where you do?

“Association of supermarket characteristics with the body mass index of their shoppers” by Scott A Lear, Danijela Gasevic and Nadine Schuurman.