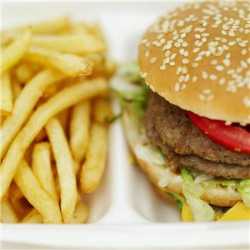 Salford Council in Manchester, UK, are doing what no other council has had the courage to do – they are reshaping the obesogenic environment by stopping fast food shops from selling to children during the day.

Salford has a major fast food and obesity problem with many children now very overweight or obese. Life expectancy in Salford is lower than the UK average and around 23% of children are obese when leaving primary school.

Salford Council’s solution is radical – and what is definitely needed – a ban on the selling of fast food to children before 5pm. The council is still in discussions, but it is hoped that the changes will be made official in the new Hot Food Takeaways Supplementary Planning Document (SPD) (you can read the draft document here).

Salford is hoping to introduce a ban on the sale of chips, kebabs and fried chicken, as well as takeaways from McDonald’s to school children before 5pm. There is a huge problem of children stopping off at fast food outlets after school to hang out.

The key change to the document is:

Inclusion of a new policy which places restrictions on the operation of hot food take aways around schools to support and encourage children to make healthier eating options.

The document also wishes to see more ethical and thoughtful practice in the food industry:

It is however important that all food providers, including hot foodtake aways, play apart in improving the health of the city’s residents, by making their products as nutritious as possible.

This is a problem that is repeated all across the UK. School children wish to meet up after school in the hours before they need to be home, but there are very few places for them to go – at least, free places. Fast food outlets provide a warm and inviting environment, a place to sit and chat. For kids they are one of the only safe places to go, but they have to buy some food to get a seat.

In 2010 Tower Hamlets council found themselves in court after granting planning permission for a fast food outlet to open near a school which had a healthy eating policy. Fried & Fabulous wanted to open their outlet close to Bishop Challoner Catholic Collegiate school in Tower Hamlets, which has around 1700 children. The school’s healthy eating policy means that they never serve chips, fatty foods, sweets or fizzy drinks.

But this is only part of the overall problem. Many schools are close to town centres which are easily accessed by school children on their way home. It is much harder for a council, or the High Court, to stop fast food outlets opening in these areas.

Also in the news this week is Croydon in South London. Croydon has its own obesity crisis, 1 in 4 adults in Croydon are obese, and almost as many children are severely overweight (around 23% of children being obese).

In the last 4 years the number of fast food restaurants has doubled in the town. In 2008 there were 134 fast food outlets in Croydon, now there are 246. Croydon has a population of around 12,500 people, so that is 1 fast food outlet for every 50 people. By comparison, Glasgow, which has a bad reputation for unhealthy eating, had around 94 outlets in 2009 and a population of 598,830, representing 1 outlet for every 6370 people.

In 2009 the FT reported that the recession had led to a boom in fast-food outlets. It seems that when more people are out of work the demand for fast food increases.

Croydon Council are still looking at planning options available to stop new fast food outlets from opening. However, the biggest challenge is to reduce the availability of fast food.

Some people argue that the presence of unhealthy food is not the cause of obesity – nobody forces people to buy it. However, statistics prove otherwise. When more fast foot outlets open, cases of obesity and type 2 diabetes rise.

Health scientists have already concluded that the reason why so many people today are overweight or obese is because we live in an obesogenic environment. Food is not only plentiful and cheap, but it is aggressively marketed and advertised.

Croydon Council is starting a new campaign to tackle obesity in the town and making a large investment into new education and services through its schools. This may be able to restrict the development of new outlets.

The biggest question is, what can it do about the current ones? Maybe it will take a leaf out of Salford Council’s book.

It has been the opinion of MotleyHealth since its formation that the root causes of obesity lie in a lack of regulation in the food industry and that only government intervention can reverse the crisis. Salford Council seem to be making some very important steps towards a healthier environment.

While as individuals we can all make healthy food choices and get regular exercise, as a society more is needed to tackle the problems. The obesogenic environment is not merely a scientific theory, it is a real situation which is causing real problems. In 2009 a study into the effects of fast food outlets and health concluded that “increased density of neighborhood fast food outlets was associated with unhealthy lifestyles, poorer psychosocial profiles, and increased risk of obesity among older adults” (Fuzhong Li, 2009).

The same trend was seen in a Singapore study, which we talked about in our article The Global Obesity Crisis. At the moment, these problems are getting worse. We continue to march towards a society where being obese and having type 2 diabetes is the norm. As much as people oppose it, we need a Nanny State if we wish to really tackle this problem. The big question for government is: what is more important, increased taxes from the ever-growing fast food industry or a reduction in health costs?

2 Comments on “Hats Off To Salford Council”