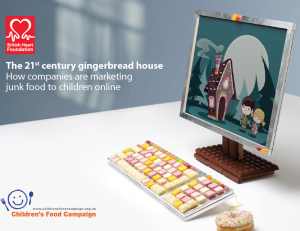 The British Heart Foundation has issued a report in collaboration with the Children’s Food Campaign entitled “The 21st Century Gingerbread House“. The report has examined how major brands are promoting their products online.

The report says that some brands are using free gifts and online games to attract youngsters. The claim is rejected by the food industry who say that all the appropriate regulations are being followed.

Junk food commercials are already banned on television to protect children from aggressive marketing tactics. However, it appears that there is a danger that children are still being subjected to cunning advertising and marketing tricks online.

The British Heart Foundation is arguing that online advertising by companies such as Kellogg’s is specifically aimed at children and that they are deliberately trying hook children using the Internet behind their parents backs. Facebook and Twitter are now key platforms for makers of sweets, snacks and cereals. Major food manufacturers will have pages for each main brand, each page being designed to draw in their target clients.

In the report the British Heart Foundation highlighted Kellogg’s Krave cereal. It is 30% sugar and contains chocolate, making it a cereal that is aimed at people of all ages. There is certainly very little healthy about this type of cereal. The Krave brand has its own website, a Facebook page and mobile phone application and game. The game is described as ‘fast paced fun‘. The BHF report is questioning who this product is really designed for, i.e. is it a product being targeted towards children or all age groups?

Summary of techniques used to market to children

The report shows how the Kellogg’s Krave website features Krave superhero characters. It also offers readers the chance to vote for their favorite flavors for a chance to win ‘choc-tastic prizes’.

The websites also features a game called “Krave Krusader” that can be played on Facebook. Krave television adverts can also be watched on a video section on the website.

Kellogg’s has already responded to the report with the following statement (as reported on BBC News on 18th Dec 2011):

“It is rubbish to say Krave’s digital marketing is aimed at kids as you need to be 17 to follow Krave on facebook and play the Krave game.”

It has also been pointed out that only people over 16 can sign up to the newsletter which sends out promotions and marketing messages for the products.

Also mentioned in the report are Sugar Puffs, which invites people to “Find Honey Monster” and is hosted by a boy called Charlie, who is Honey Monster’s best friend (do you know any adults that still have a “best friend”?).

“Site visitors are asked to seek parental permission if they are under 16, but the advice to parents says consent is required for children under-12 years.” BHF Report on Sugar Puffs.

Other brands scrutinized by the report were Rowntree (marketing includes interactive games in a child’s bedroom), Capri-Sun which has a dedicated “teenzone” and activities such as “Picture yourself as a pop star” linked from the site, and Chupa Chups and Cadbury Buttons, both of which have website features and games that are attractive to children.

Although many of these sites do quote age restrictions, everyone knows that children sign up to Facebook at around the same time they attend secondary school at the age of 11 and give a fake age, and nobody takes any notice of the age restrictions on websites!

The food industry says that its regulations for online marketing are in place but the report says that they are inadequate. The report also says that Kelloggs are using tactics to target children.

This raises much bigger questions though about regulation online. Advertising on television and in magazines is easier to regulate as everything is in the public domain and if there is a problem and advert can be stopped with immediate effect. Online this is not so simple. With so many websites and pages that are behind registration walls only those who are members know what is being said.

In a clever twist the British Heart Foundation are using the very same tricks used to lure in young customers to help explain how major brands are using social media and the Internet to advertise to children, in an interactive lesson called “5 Steps to Junk Food Marketing Success” which teaches us how they promote their Lard Bar!

“My simple plan reveals all the secret tricks of the trade to help get your product down the throats of as many children as possible. I’ll show you how it’s done using my new product, the Lard Bar” BHF.org.uk

On the BHF website once you go through to the 5th step you are then invited to send an email to Jeremy Hunt, the British Culture Secretary, to tell him to put an end to online junk food marketing to children.

With the rise of mobile phone usage and the numerous apps that go with them, it is impossible to monitor, regulate and control what is being said. Finally, with so much emphasis on social media in advertising today, marketers are leveraging their own client base to spread the message about new products and there is no way to regulate what or how clients share information and opinions.