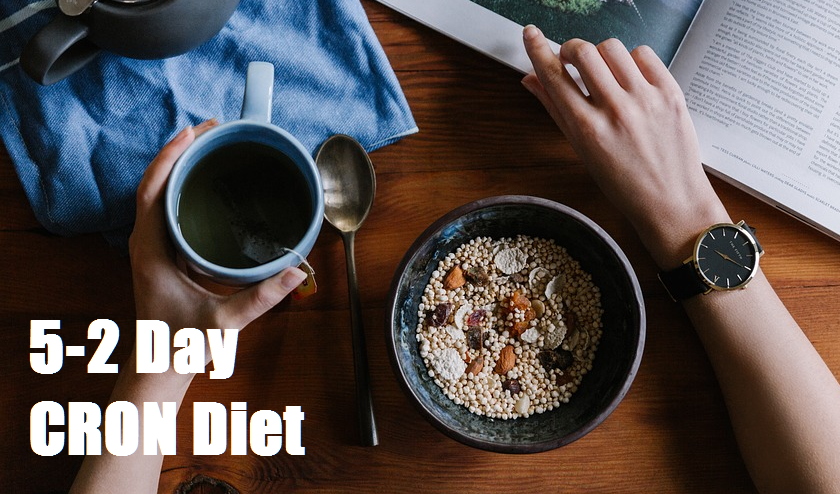 Michael Mosley presented in a recent BBC documentary the theory that a low-calorie diet extends life. He looked at 2 types of diet; CRON and ADF, and then discusses the 2 Day Diet and feast / fasting.

He met an individual who eats only 1900 Calories a day and is in great health, a 101 year old marathon runner who eats small portions of food, and long-lived mice that have been genetically engineered. This led him to investigate the effect of fasting on the human body.

Michael Mosley has since co-authored a book, The Fast Diet: The Secret of Intermittent Fasting, with Mimi Spencer. Many people now call this form of fasting the “Michael Mosley diet”.

Basics of the CRON Diet

American research has shown that a “CRONy” diet can extend life. CRON stands for Calorie Restriction with Optimum Nutrition. This is not a very low-calorie diet, people stick to around 1900 Calories a day. The key is that you eat a low protein, low-fat, high plant diet.

The research with mice shows that a calorie restricted diet leads to a low level of the growth hormone called: Insulin Like Growth Factor One (IGF1), and this hormone is linked with longevity.

It seems that people who eat very little have less incidence of cancer, diabetes, heart disease, strokes and other conditions that tend to affect people in western civilizations today. A CRON Diet seems to make a lot of sense.

Research into IGF1 shows that when the hormone levels fall, the body becomes more efficient at repairing DNA damage.

Our diets affect how much IGF1 we produce. Protein triggers increased IGF1 levels, which puts the body into “go go mode”, which means that it starts to grow rather than consolidate and repair.

However, just eating less is not enough, you need to eat less protein and fewer calories. If you can stick to recommended guidelines for protein and calorie intake then this should be enough. The problem is that most people eat far too much. Following a CRON diet plan can help you to reduce calories and get the right balance of protein, fat  and carbohydrate.

What Michael Mosley investigated was the effect of regular fasting to help reduce protein and calorie intake in short bursts.

Within 3 days and 4 nights of fasting positive results should be seen. It is obviously very hard to accomplish this. Some celebrities have famously fasted their way to a slimmer body, however, there has always been a debate whether this is healthy. Prolonged fasting is certainly dangerous to health.

Michael Mosley’s 3 day fast involved nothing but water, hot tea and a 50 Calorie powdered soup every day. This is as extreme as a calorie restriction diet plan can get.

Hunger comes in waves and then passes. By the third day he had used up all his glucose reserves and started burning fat for fuel and sugar.

Of course, the test was to see if a 3 day fast did indeed reduce his IGF1 levels, and therefore, increase his body’s ability to repair itself.

The results were as expected – his IGF1 levels had fallen to almost half of the level before the fast. However, you need to permanently switch to a low protein and plant-based diet to ensure that the IGF1 levels remain low. Also, it is recommended that you fast once per month to maintain the effect.

The alternative is to be taking 8 different drugs a day by the time you hit your 60’s to control blood pressure, diabetes and a host of other conditions.

Michael Mosley concluded that despite knowing and understanding all the benefits of fasting on a regular basis, he just could not bring himself to do it.

However, the story does not end there. Dr Krista Varady of the University of Illinois at Chicago has been researching the positive effect of Alternate Day Fasting.

Alternative day fasting involves eating one small meal on the fasting day and then as much as you like on the feeding day.

“As long as you stick to the calorie levels on the fast days, you can eat as much as you like on the feed days”. Dr Krista Varady

A big surprise was that it does not matter if you have a high fat diet on your feed days – the same health benefits are seen in high fat and low fat diets.

Also, people do not tend to eat as much on the feed days. Rather than consume over 150% of the normal day calories they do not over-compensate, total calorie intake is around 110% of a normal diet. So, total calorie intake over the 2 days is lower. Some nutritionists believe that this is the best calorie restriction diet, as it mimics the natural diet that we evolved to follow.

Aging and the Brain

New research by Professor Mark Mattson, a neuro-scientist in Baltimore, is showing that fasting may reduce the onset of conditions such as dementia and Alzeimer’s which affect cognitive ability.

Fast food diets with high sugar and fat has a dramatic effect on the onset of memory problems.

Research showed that fasting promotes the growth of new brain cells. New neurons are grown during periods of fasting in the same way that exercise makes muscles grow. Hunger improved brain function, and fasting may be more beneficial than just following a lower calorie diet.

Michael Mosley decided to adopt a “5-2 Diet” which is 5 days of normal eating followed by 2 days of eating 600 Calories a day (also called a 2 day diet) – so not strictly fasting, but eating a very low calorie diet. Michael stuck to this new lifestyle for 5 weeks. He ate breakfast as his main meal of the day. For ideas about eating see our page meal ideas for the 5:2 diet.

After the 5 weeks on a 5 2 diet plan, Michael Mosley lost 14 pounds and dropped his body fat from 27% down to 20%. He also dropped from the “overweight” category according to BMI and into the healthy weight category.

The big news was that by fasting 2 days a week he made some big changes to his IGF1 levels by 50%. Also his blood glucose levels fell, so he was at much lower risk of developing diabetes. His cholesterol levels fell too, which reduced his risk of heart disease.

Although Michael Mosley had very positive results, it does not mean that it will work the same way for everyone. Michael has chosen to stick with the intermittent fasting as he wishes to avoid diabetes and cancer.

Michael Mosley concluded that fasting was definitely a way to help people to manage health and reduce risk of developing the big killers in the West – heart disease, cancer and diabetes. A CRON diet may not be the ideal solution, but it will certainly help to ward off some of the more serious health conditions that tend to occur later in life.

Fasting can be very dangerous to health, so you should always consult a doctor before starting a fast.