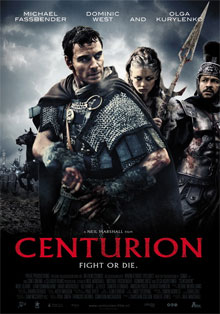 Michael Fassbender played Stelios in the film 300 and is now the lead role in the new Roman Empire epic, Centurion. He stars alongside Dominic West who was also in 300. Fassbender is also playing the young Magneto in the next X-Men movie.

Centurion tells the story of the Roman legion that was sent to Scotland to overthrow the Picts in AD 117. Michael Fassbender plays Quintus Dias, the sole survivor of a previous battle with the Picts, and Dominic West plays Titus Flavius Virilus, the commander of the Legio IX Hispana (the ninth legion).

Centurion was a very physical film to shoot, not just in terms of fighting, the terrain was horrendous at times, and the actors had to climb steep hills, wade through snow and do some of their own stunts in ice cold water.

While Fassbender needed to look the part for Centurion and be physically fit, he mostly just had to draw from his experience in 300 to get in shape for Centurion. So it is back to compound exercises with free weights and bodyweight exercises. Typical weight training exercises would include bench and shoulder presses, bent over rows, bicep curls and squats. These keep the body in great shape and help to maintain muscle mass. Then in addition to some pure strength training he would perform the power exercise routine – a 300 style workout, a.k.a. a Centurion workout!

Start by warming up for 5-10 minutes with gentle jogging, rowing or cycling. Then quickly run through these exercises to help prepare the muscles for working;

Then we perform the workout which is a combination of weight training and bodyweight exercises – this is really just the old “300 workout”:

That is 300 exercises. This is more about muscular endurance than brute strength. Your aim should be to complete the workout. If you need to reduce the weights, add assistance (bands, stability balls, chairs etc) to the pull ups, and split the exercises into multiple sets of 10 with a breather, this is fine. The key is to work through the lifts.

Michael’s fitness and strength would also have developed during fight training. Wielding weapons  even stage weapons  requires a lot of energy, core strength and endurance. To learn to make battle look realistic you need to be able to wield a sword, carry a shield and move efficiently. This takes hours of practice. Constant 2-person fight drills would be performed so that movements would be learned. Then fight sequences would have to be learned from the choreographer and practised.

Fassbender is generally in good shape so he did not need to do too much for his role as Quintus Dias, mostly because the film is set in the cold Scottish Highlands and not the warmth of the Mediterranean, which meant he did not take his top off (or his armour).