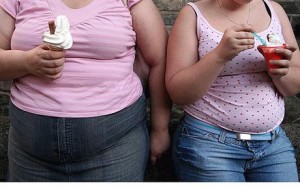 Latest figures reveal that the UK has the worse obesity problem in Europe. The European Union’s own statistics agency, Eurostat, published the results of the European Health Interview Survey (EHIS).

The key finding was that 23.9% of all women in the UK are considered obese, i.e. they have a body mass index of over 30 points.

UK men are not far behind, with 22% of all men now obese. It is only in Malta that there is a greater percentage of obese men.

The UK is not at all far behind the USA now either. 26.8% of America women and 27.6% of American men were recorded as obese during the same time.

The healthiest European countries in terms of weight are Italy, Bulgaria and France. However, even though these are the healthiest countries, they are not without their problems. 10.3% of Italians are obese and in France around 12.2% of the population is obese. These are still very high figures.

Considering that there are many more people who are just overweight, the health of Europe is still in a dire situation.

5 Billion Calories too much!

British Health Secretary, Andrew Lansley, has said that overall Britain needs to consume 5 billion fewer calories every day than is currently eaten. This works out at a very small reduction per person, however, this is not a very helpful piece of information from Andrew Lansley!

Research and studies have already determined all the major causes of obesity, so there really is no need to speculate why we have such a bad problem. Here is a round-up of the main reasons why so many Briton’s are very overweight or obese.

Studies have shown that women who work in full time employment are more likely to have overweight children. They simply do not have the time to prepare healthy, home cooked food. Also they have little or no time to exercise and the services most often provided fail to fit in with a person’s lifestyle.

Too much private transport

Using public transport helps you to lose weight. Car ownership is a major cause of weight gain. People simple used to walk a lot more than they do today.

Food industry is too powerful

The food industry is driven by profits and not health. This means that companies produce the cheapest food possible with the most energy possible. This fulfils the demands of the people (cheap food) while also satisfying their customers.

This plays a small role in health. 100 years ago people were not more educated and there were fewer cases of obesity. However, more educated people do tend to take greater care of their health.

The “human zoo” is a phrase that was coined to describe our urban environments. We have altered our environment considerably without adjusting behaviour. Food is on tap 24 hours a day and no effort is required to obtain it. Transport and travel is easy.

Every single overweight person eats to much. This is a fact. There are really no major genetic causes of obesity. Slow metabolism or “fat genes” make hardly any difference. The problem is people eat too much food. Much of the eating is “emotional eating”. Food taken not due to hunger but because mood dictates appetite. It is a sad reflection on our society that people are eating themselves to death.

“Between 8% and 25% of adults are obese across Member States” European Health Interview Survey, 24 November 2011. Eurostat.